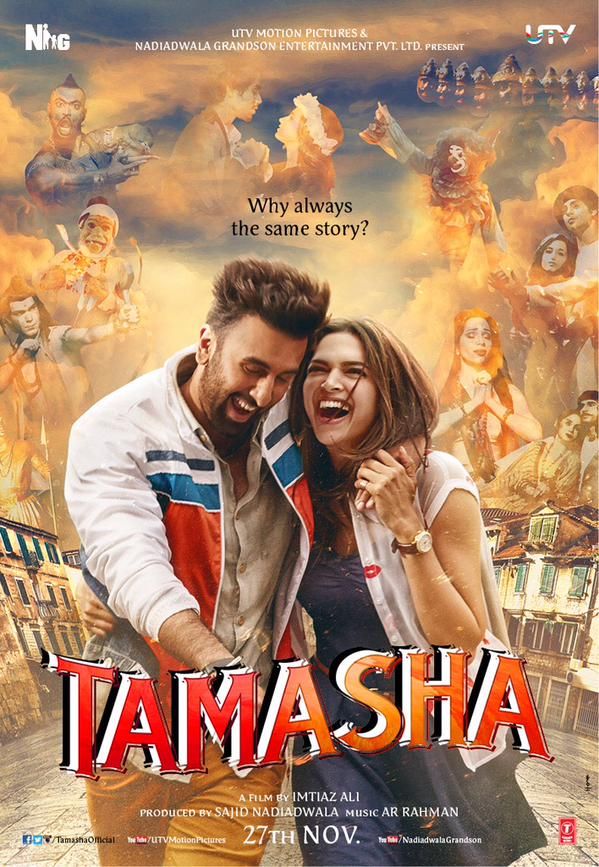 Directed and written by Imtiaz Ali the upcoming movie Tamasha seems to be a romantic flick by the first look. But what is unique in the trailer is the new concept of romance with the tag line itself stating -Why always the same story?

The trailer does not reveal much about the plot except the two protagonist -the hero and the heroine fall in love while hiding their actual identity, their real life their authentic personality from each other.

The narration begins with a flashback where in Ranbir Kapoor an engineer by profession moves out of India to Corsica, France and meets a girl, the heroine- Deepika Padukone. Deepika is shown in a bubbly, bold, confident avatar. The kind of role she has done in many of her earlier films as well.They both get acquainted as Don and Mona and fell in love without revealing their true life. The introduction part seems interesting but it also gives an impression of the common Bollywood romantic movies where hero and heroine meet in a picturesque location, fall in love and then part.

But then comes the second part of the trailer where the two leads are shown as Ved and Tara, back in India I guess. They both look serious, both in love but with whom? And, then comes the uniqueness of Imtiaz Ali’s script a stage show is shown and with that a question- Why always the same story?

There is drama, longing, love and search for that love which Tara is looking for, but whether the love is for Ved or is it someone else? May be its altogether something different which is yet to be revealed?

Imtiaz Ali has never failed to give a fresh and different plot to his audience. I feel the same passes for Tamasha as well.It would be worth watching whether this movie proves a blessing and is able to re-establish Ranbir Kapoor’s charm back which audiences have been missing since Barfi.Background score is decent. Music is given by A R Rahman and lyrics by Irshad Kamil.

For now the trailer looks the movie will be interesting, fresh and worth watching.Lets see whether it will recreate the magic of romance of Deepika and Ranbir similar to Yeh Jawani Hai Deewani

I rate the first look with 3.5 stars.

The trailer can be watched here-

A Mechanical Engineer by profession who loves to spread her voice through her thoughts. Inquisitive and curious by nature, I think a lot and that is why I always love to write.
An avid reader, a foodie, and sometimes a critic I like to voice honest and genuine opinions about my experiences.
I blog at himaniagarwal.wordpress.com.

View all articles by Himani Agarwal