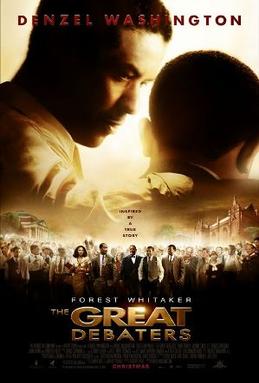 The Great Debaters is about an underdog debate team which through perseverance and grit finally end up being national champions.

Set up on the backdrop of a period when the atmosphere in America was fraught with racial tension, a Professor from Wiley College (Denzel Washington) sets forward to create a debate team which eventually goes forward and beats the prestigious Ivy League college Harvard to become the national champions. The movie draws analogy from sports movies but is able to differentiate itself because of the theme where a black debate team stands up against an elitist white school with the undercurrent of white supremacy and the resistance of blacks against it.

The movie depicts the sojourn of Professor Melvin Tolson, a radical, a believer and an exceptionally glib person who creates a team of underdogs in an African America college in Texas in the era when the tension between the whites and the blacks was quite blatant. Despite his personal political beliefs, he did never let that impact his relation with his students nor did the politics permeate the debate club. He was always challenged for his radical beliefs and quagmire ways but his self-belief never let him loose hope.

The movie beautifully depicts the relationship between a teacher and his disciple and among peers.  Like a painter, Denzel Washington has been able to put his characters into a canvas and elicit from them remarkable performances. After gruelling auditions Tolson selects four candidates, all of them different in nature, creating a diversity which was very much essential for the team. On one hand the team had Hamilton Burgess, a serious and brilliant debater and on the other hand Henry Lowe who is a bit relaxed about life but one of the wittiest person that could have been selected. By selecting a female debater, the first one to be on the team showed that Tolson respected talent and sensibility. A serious issue of a woman being on a team has been beautifully portrayed; the movie takes on varied topics of the society existing in those days. The last one to be selected was James Farmer Junior, a 14-year-old child prodigy in college who was a brilliant researcher.

More than competition the movie focuses on how education is the sole savior from the shambles of disparity and apathy. The fear in the Farmer family’s eyes when they accidentally kill a pig and are virtually looted out of their money just because they are black, the hatred filled inside Howe when the team sees a black being burnt and hung on the tree are one of the few instances which try to carve out the seriousness of the stark reality which haunted the whole country during those days.

However no movie could be perfect and so has been the case here.  Despite its fast pacedness and captivating plot, it would have been interesting to see how the great debaters would have reacted to a situation where they have to debate on a topic which they did not strongly believe upon.  Further the ending leaves the viewers yearning for more interactions between the debaters and their mentor after the epic win.

Nevertheless, a stellar performance by all the actors, a brilliant screenplay and awesome cinematography makes this movie stand out and categorized as a worth watch for all cinema lovers.

An engineer by profession, I am an avid reader and writer. I blog to express my views on any topic possible.

View all articles by Ankita Verma