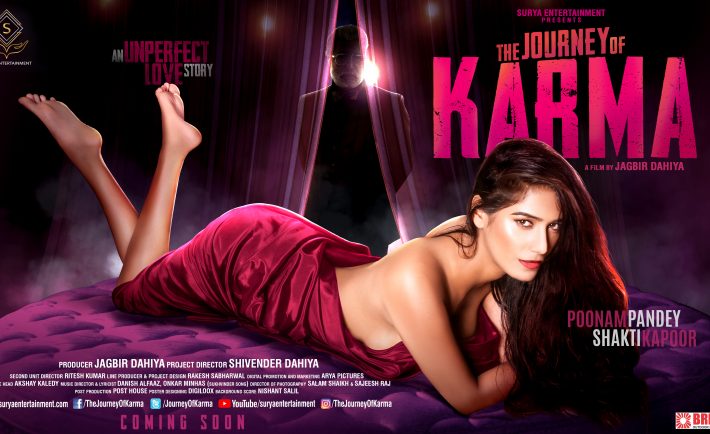 What happens when Karma plays the role what it is known for ?!

As they say in the Karma , what goes around , comes around ! Whats it going to be this time ??

Good work and strong cast is like the cherry on the cake of a good story. The seduction queen Poonam Pandey and Nandu Sabka Bandhu, Shakti Kapoor are both making comebacks in the upcoming flick – The Journey Of Karma Produced by Jagbir Dahiya of Surya Entertainment.

Going with the tagline ‘You get what you deserve’, The Journey Of Karma is about a girl who is financially very poor and stays with her mother. She has her own dreams to pursue I.T Engineering and wants to study in America but because of her financial conditions she is facing a lot of problems

Then comes a guy (Shakti Kapoor) who loves her but because of the age difference between two, he is not able to express his feelings.

The whole movie is about the poor girl and the problems she faces in life to achieve her dreams to become an I.T Engineer and go for further studies in America, but the people always wanted to take advantage of her situation.

And like we mentioned the film also stars Shakti Kapoor in an extremely different avatar. It is learned that the veteran actor didn’t color his hair or trim his beard for as long as three months just to get the right look for this movie!

Well with such an interesting cast and the storyline to go with, we are sure this movie is going to hit the right chords!

Check out the teaser here