After a weak 2016, Tata Motors made a great comeback in 2017 with the launch of much-awaited SUV, Tata Hexa.
With features like masculine body, attractive and classy exteriors and interiors, power packed engine and super drive modes; this lifestyle vehicle was appreciated by people from all walks of life.

So after making a powerful statement in the SUV sector, Tata Motors is all set to create the same magic in the Compact Sedan world too with its Styleback vehicle, “Tata Tigor“.

It comes with both the engines, Petrol and Diesel.

I got the opportunity to try my hands on both of them and here is my say about the Compact Sedan. 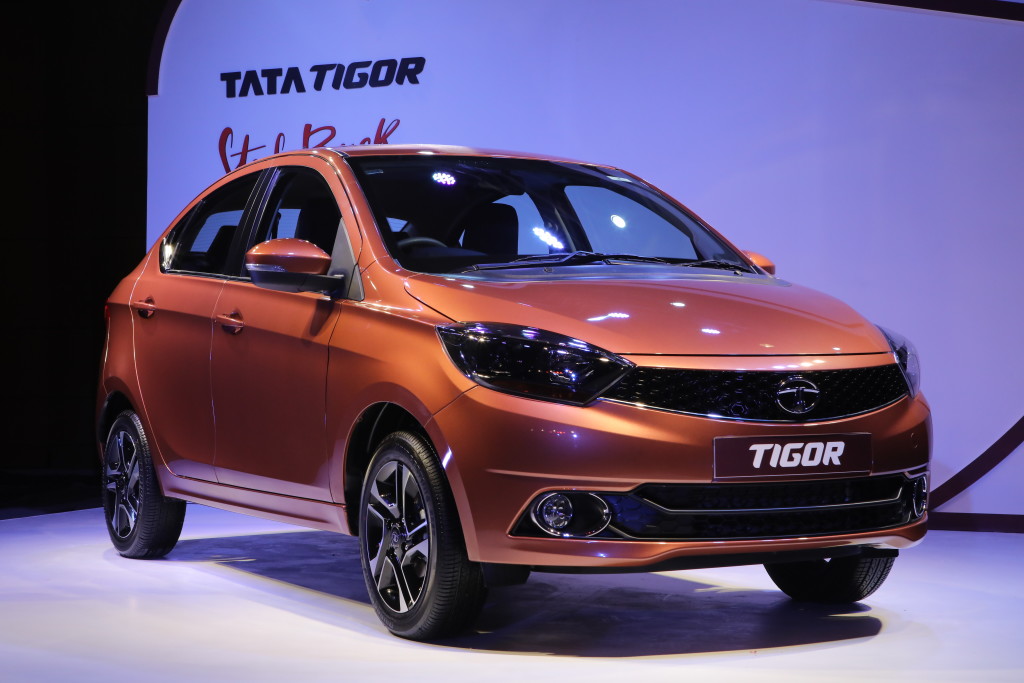 Exterior
Tata Motors have done great with their last 2 launches, Tiago in the hatchback segment and recently launched Hexa, which is largely due to the company’s focus on the design part.

Here too the magic has worked really well and the exteriors are amazing. 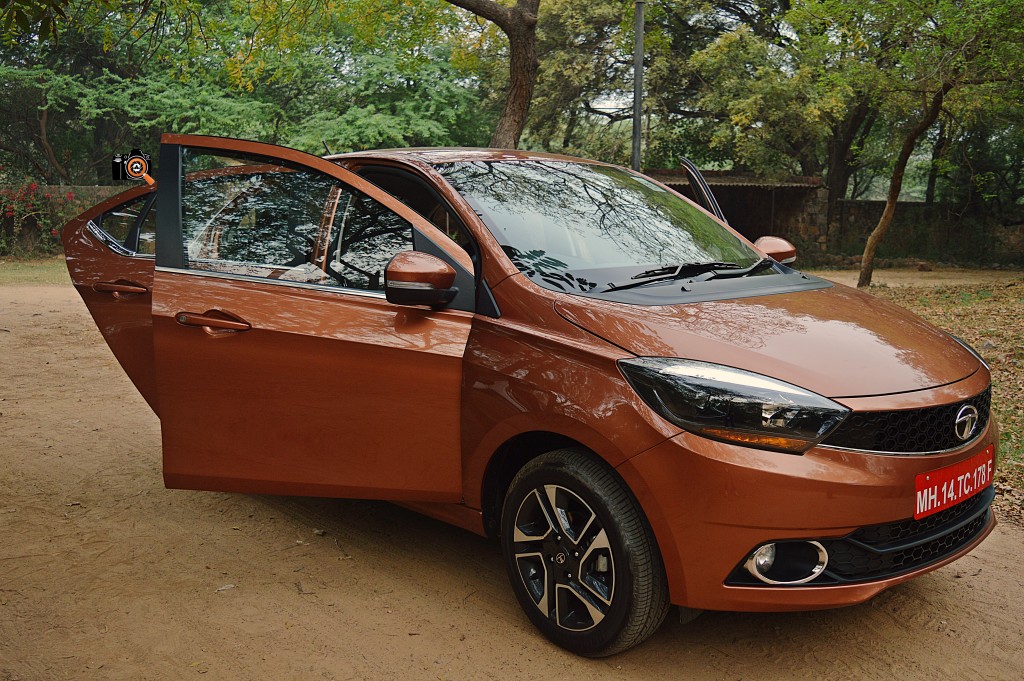 The front of the car is similar to the Tiago, extra features include more detailing on the grille and smoke treatment being given to projector headlamps. 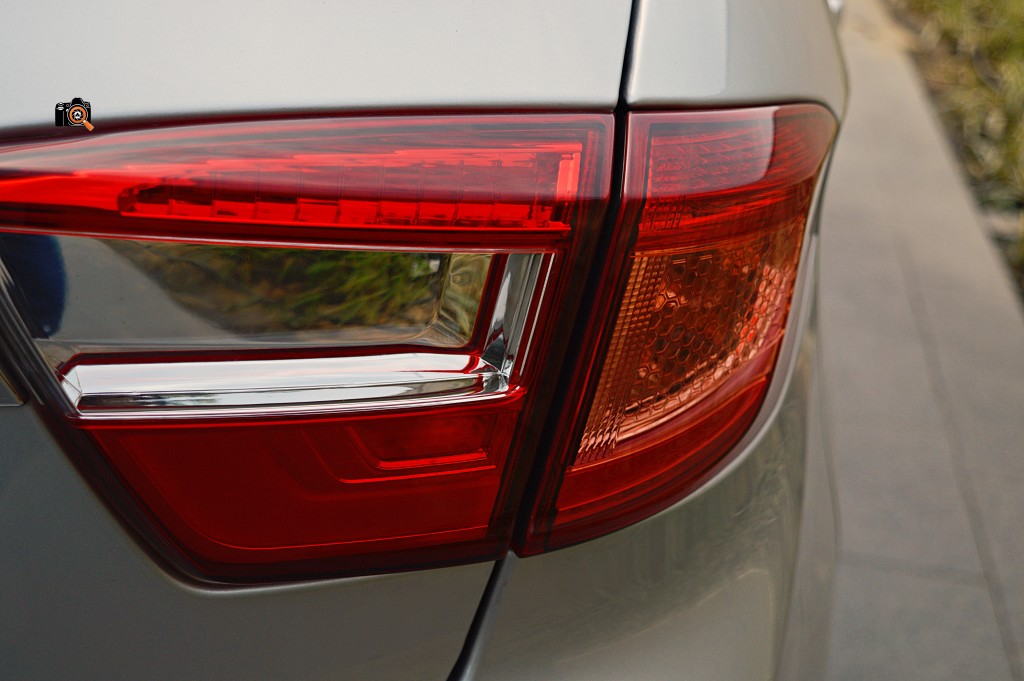 Now coming to the biggest attraction of the car, the roofline.
The roofline merges with the boot giving Tigor a coupe-like appearance.

Hands down, Tigor is the prettiest Compact Sedan in the current Indian market. 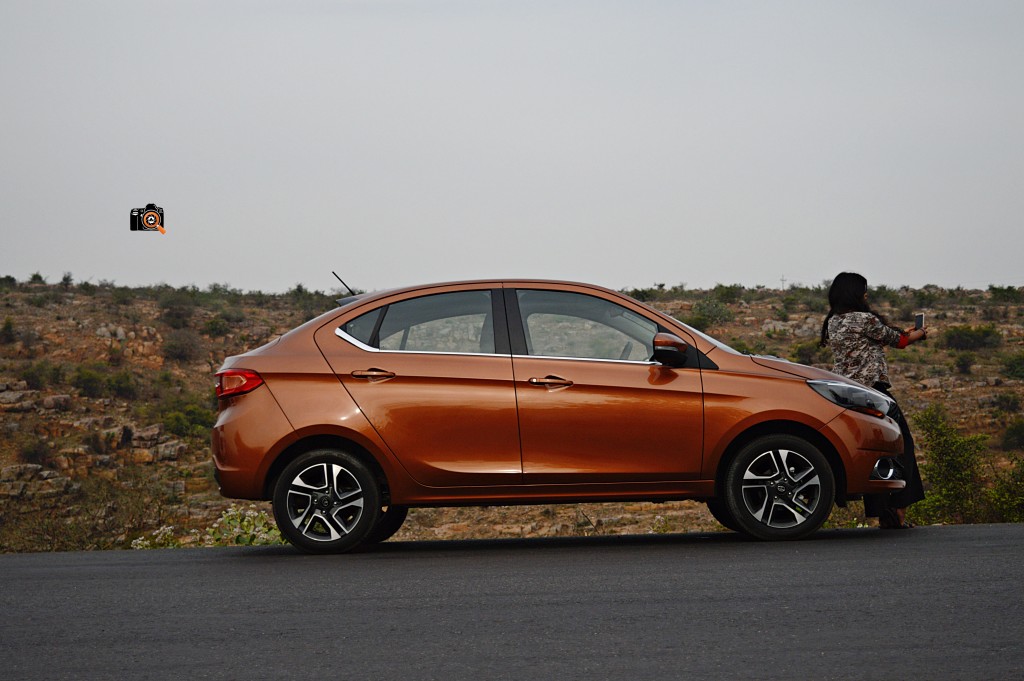 Interior
The first look at the dashboard and the cabin recalls the Tiago memories.

The dashboard looks quite premium and royal. The AC vent surrounds comes painted in rich colors.

The seats are cushiony and comfortable. The cabin is spacious. The steering wheel is stylish and placed perfectly, giving you a good feel while driving. The revised central console looks classy and is home to the new touchscreen infotainment system and climate control dials. 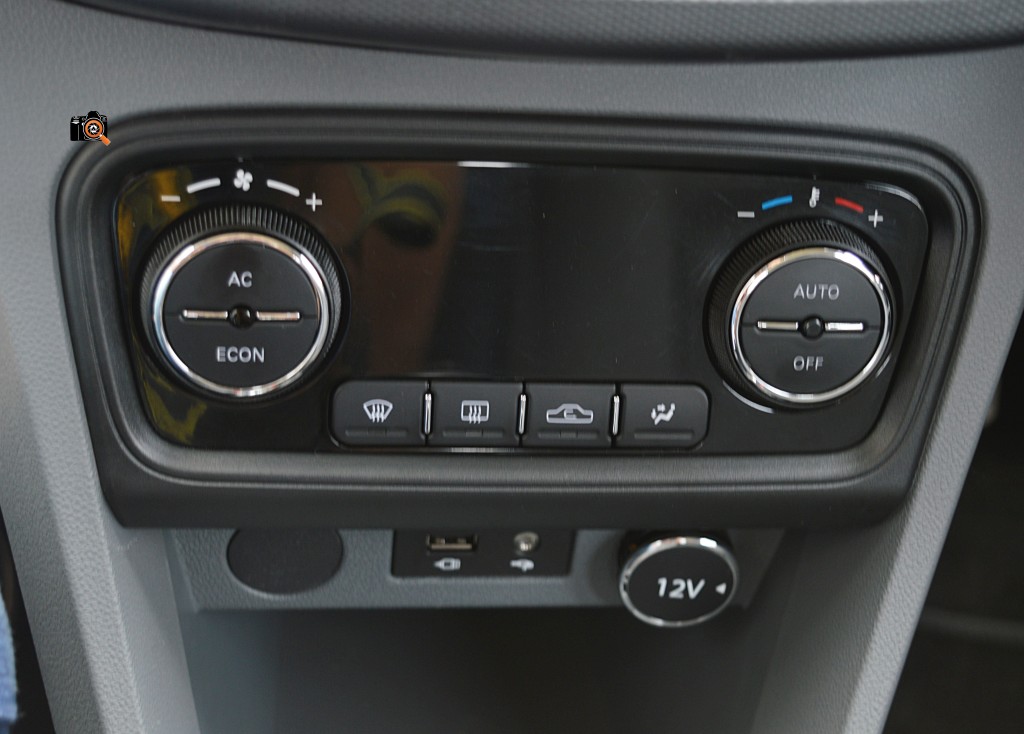 There are 24 utility points inside the car to keep water bottles, mobiles etc, even the armrest comes with two cupholders.

At the rear 3 adults can sit quite comfortably and there is also a fold down armrest provided which comes down when the middle seat is not in used.

Finally coming to the trunk of the car where we can find some nice innovation in terms of maximizing the boot space. Tata has got rid of the traditional hinges for the boot opening and opted for a multi-hinge arrangement which has ensured extra luggage area.

Infotainment System
The infotainment system in Tigor follows the line of Hexa.
The new Harman developed touchscreen infotainment system comes with most of the intelligent features that we have seen in Hexa such as playback via FM/AM, USB, iPod, voice recognition, rearview camera, navigation and other on-screen display facilities.
There is also a suite of mobile apps that you can use with the system.
Tata Tigor houses credible speaker system.

The sound at the highest volumes is quite powerful, clear and noise free. 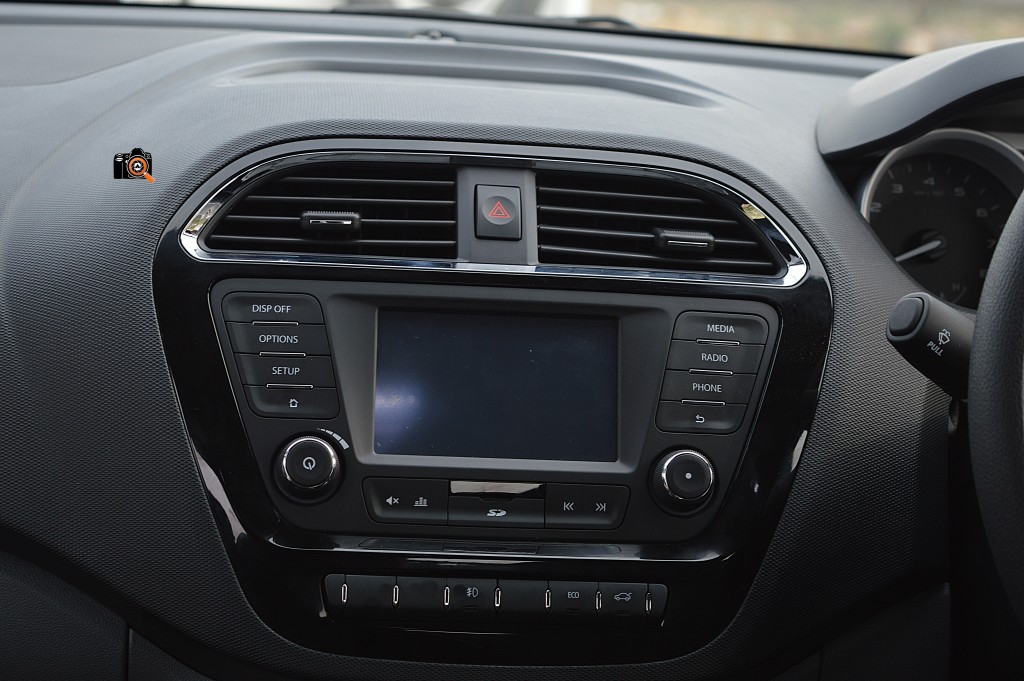 Driving and Control
I loved driving both the version of the car whether it is petrol or diesel.
Smooth gearbox, light clutch and well-weighted steering keeps the car in good control making the drive a comfortable affair. Whether it is in the city or on the highways, Tata has ensured that you experience a smooth ride. 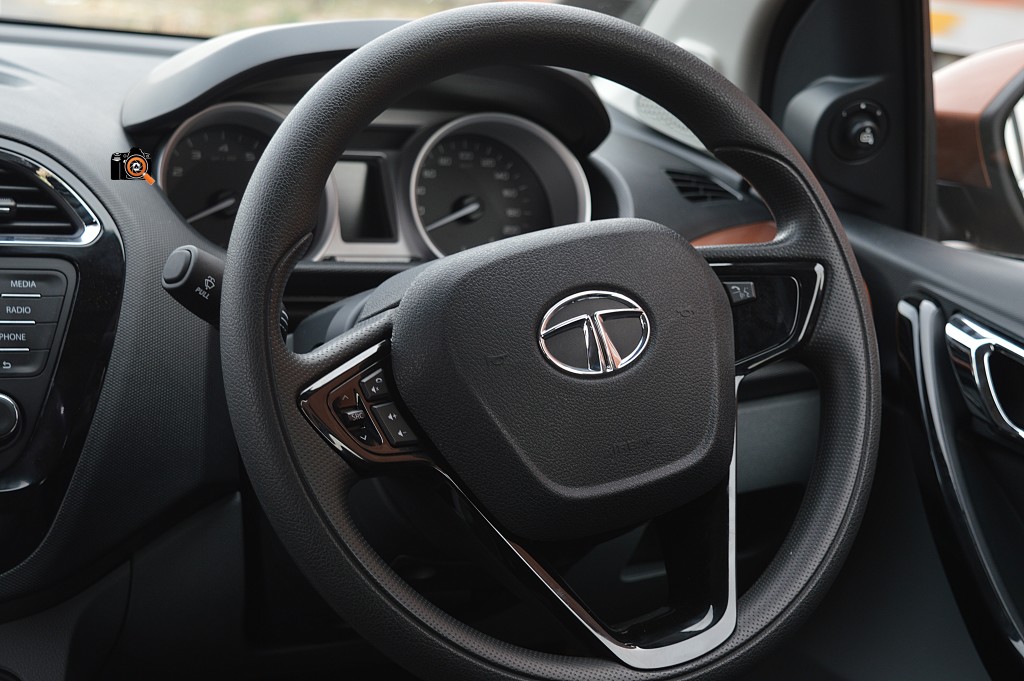 Both the Tigors offer two drive modes, City being the default one and Eco to enhance the fuel economy.

The only thing to improve on here is the power capacity of the engine.

Once extended beyond 100, the car doesn’t offer a quick move on and we have to push the accelerator real hard to get that extra throttle. The diesel part is a bit sleek than the petrol one when it comes to pick-up but on the other hand it is a bit noisier too. 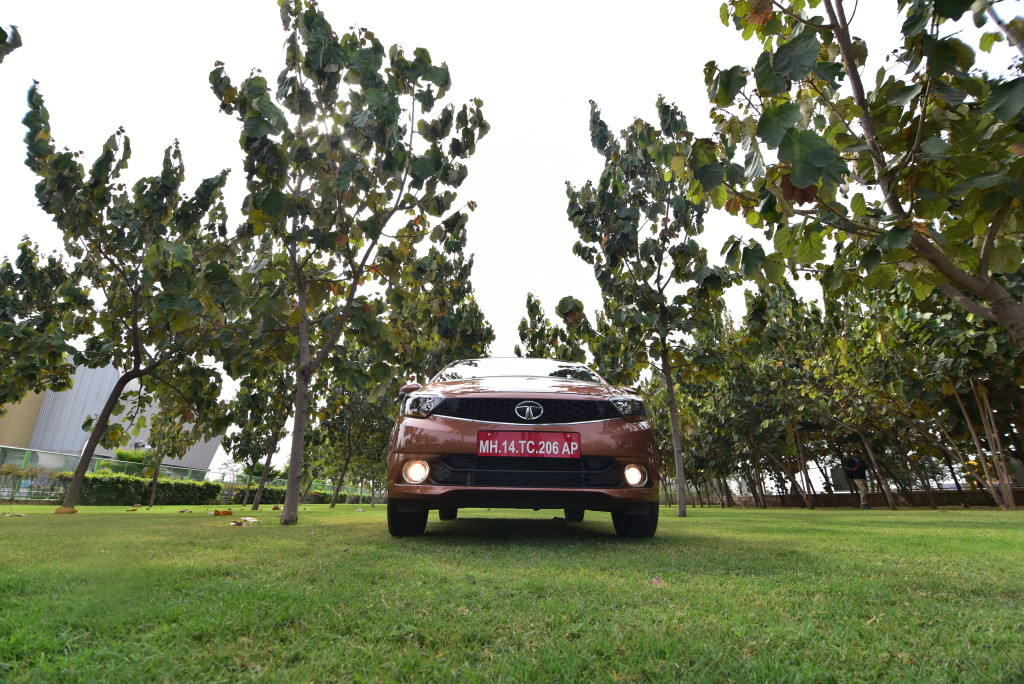 Overall if a little more emphasis is given on improving the power capacity of the engine, Tata Tigor can stand at par with the other cars in its segment, in terms of driving and control.

Verdict
Tiago scripted the comeback story of Tata Motors and the launch of Hexa assured that there was no looking back for them. With Tigor, Tata is all set to make other brands run for their money.

Attractive and classy exteriors and interiors, loaded features like awesome sound system and superb cooling system, spacious cabins and plenty of boot space make this all new Styleback Compact Sedan from Tata a player to look out for in its segment.

The only not so cool factor is the engine which could be a little more peppier and refined.

If priced properly, Tigor can easily become popular among the masses especially the middle-class segment.