“Nahi, Nahi, Nahi!!” / “kya, kya, kya!!”
Do you remember these three so-called legendary words, once used as signature dialogue to specify the over-melodramatic Indian daily operas?
Are you interested in reading the history book of daily soaps – “The saga of Indian TV serials” ?

Our heartiest congratulations to you if your answer is NO..!! as you are one step forward towards finding some good and original content to watch.
Gone are the days when people used to wait for the clock to show 10 in the night so that they could watch the daily soaps with typical “saas-bahu” drama or some overwhelming family emotional track. Then, the focus moved towards reality shows. But the interest in the reality shows is also taking a downward trajectory since all of them seems to have the same content and are scripted. There is a rising demand for limited episode series having original story and unexpected twist in every episode which can make the audience go binge-watching.
And in the list of available options that provide original and good content, Amazon prime has done amazingly well to make to the top of the list. 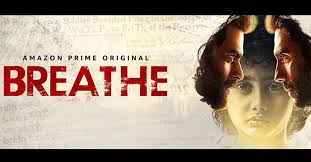 Yes, first with “Inside Edge” and now with “Breathe”, it is really connecting well with the Indian masses.
The traditional long-run TV shows are no more part of everyone’s daily schedule and the limited episode series are becoming quite popular among the masses. The audience is getting bored and irritated of the unnecessary stretch of the long run episodes’ track and is more interested in watching new twist and thrill in the limited episode series.

Amazon has decided to invest in this concept of entertainment and for that it has done a lot of preparations like conducting workshops, offering guidance on storytelling in a limited format as well as on developing a longer story arc and giving tips to their Indian script-writers on how to draw out individual characters in collaboration with their US and UK counterparts.

As per one of the reports by The Economics Times, Amazon, the tech giant has invested more than $77 million in original content production in India. And that means, in the coming days too, we may get to see more original and fresh content online with just an online subscription of INR 500/year which can bring a lot of refreshment to the hectic schedule of many people. With the advent of Indian government’s “Digital India” campaign, this concept of original content by Amazon might reach many of the potential viewers searching something different from traditional TV shows.

I, myself, being a series lover always look forward to upcoming series especially in suspense-cum-thrill genre (being my favorite). Recently I came across “Breathe”, the new series of Amazon Originals, and believe me, I watched all the episodes in one go as you simply can’t avoid it.

My take on “Breathe”

Directed by Mayank Sharma, Breathe, is an 8-episode thriller drama that can cause adrenaline rush in your thoughts when you see an ordinary person trying to change the destiny of his son by framing some extraordinary circumstances. At every coming scene, you get to see new circumstances being created by a father to change the nature-destined turn of events for his son.

Okay, first of all, let me ask you some very basic questions,
“How far will you go to save the life of a loved one?”
“How far can you go to ignore the love of the other families for their loved ones for yours?”
“What are the justifying reasons you can give to yourselves for your actions and deeds?”

Yes, these are some of the questions around which the story is being woven and presented in a suspense-thriller form.
Danny Mascarenhas (R. Madhavan) is a single parent to a six-year-old, Josh, who suffers from lung failure (Cystic Fibrosis), a congenital life-threatening disease, and can be saved only after a lung transfer. Time is running out and his father who loves him with all his life and can himself die for him decides to take an unusual and unreturning path to save his son’s life. While doing so he confronts a cop, Kabir Sawant who is a brilliant police officer and has unconventional abilities to bring together the unusual criminal shreds of evidence. He tracks down the unconnected deaths of organ donors and narrows down his suspects’ list to few people. Danny comes on the top of this list. Yet, Kabir is not able to get any strong evidence against him and Danny has a strong alibi for his innocence.
But, Kabir is too determined to crack the case and find the true culprit and hence begins the cat and mouse chase between the duo. The thrills and twists take a new turn with each passing incident.
Till the 7th episode (released till date), we have seen many different temperaments and faces of Danny and Kabir, and in all of them both are too stubborn to give up on their tasks. A lot of times we had found ourselves dwelling around different shades of white and black to decide our side (either father or criminal) in the story.

The director has painted the complete script in decent colors of gray, at times with an inclination towards black and you can also find yourself oscillating on the shade card to decide the relative right and wrong.

While going through the storyline, I just had the thought of what would have I done if I would have found myself in the same situation as Danny?
Had I also thought of just my son’s life without giving any damn to the feelings and lives of the donors and their loved ones ?
Or I could have gathered the strength to let my son die day after day in front of my eyes?
Yes, it is very truly said in the story that,
“Bimar ke saath jeena bimaar hone se jyada badtar hai”
I agree that it’s too tough to see your loved ones’ die especially when he/she is your only source of strength in life, yet that should not lead us to the path where we could become apathetic to the feelings of other people who love their loved ones equally and unconditionally.

Injustice has no justification, no matter how many times we say that “Apno ko bachane ka sirf ek rule hota hai ki bloody koi rule nhi hota”
Eagerly waiting to see how all this ends up (in the eight-episode).
So if you guys are suspense lovers and would like to watch an original series in which you can relate yourself with the protagonist and could have sympathy and apathy for him at the same time and where you can’t wait for the last episode to air, then this is the series for you.

So get your prime membership today if you don’t have one and ready, steady, go for the binge-watching. I bet, you cannot avoid that.
Here is your link to watch the breathe amazon prime original.