“Ab dangal hoga’.. I guess these three words sufficiently shed light on the state of mind, director (Nitesh Tiwari) and producers (Aamir Khan being one of them) had at the moment they gave their final thought on doing the biopic of the first ever Indian female wrestler to qualify for Olympics. 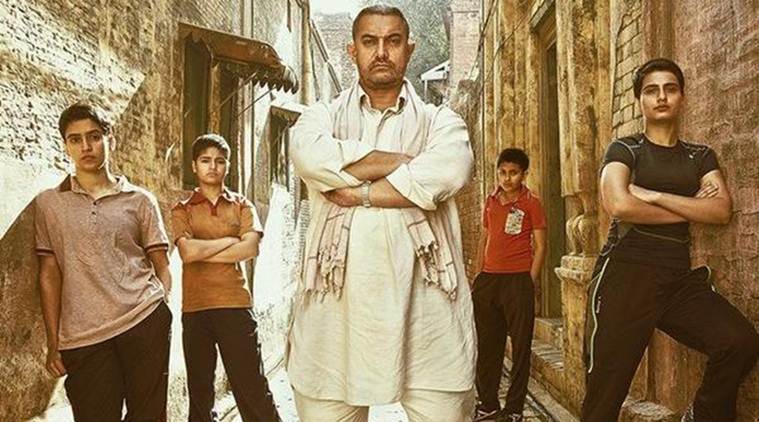 Dangal is about a father, Mahaveer Singh Phogat (Aamir Khan) who has to give up his dream of being an international wrestling champion but what he never gives up is the idea of bringing the gold to home.

He craves for a son who can live out the dream for him but the destiny put bars on his enthusiasm and he ends up with four daughters. On realizing the potential for wrestling in his two elder daughters (Geeta Phogat and Babita Phogat), the father decides to coach them for the same in spite of all the odds (societal pressure, financial hurdles and the worst being lack of interest in the participants). And the rest of the story is all what an entertainment-cum-soul-stirring talkie can provide.

It is the story of transformation of two young girls from reluctant wrestlers to passionate sportspersons which proceeds well with an element of clashing egos (for a while) between the father and the child and  ends with a climax which imbues feeling of nationalism in the audience.

And here is the review

“Misaale di jati hai, bhooli nhi jaati”. The story surely let its viewers feel the essence of the dialogue and instigates a sense of determination and persistence in them.

The historic win of the Phogat sisters’ at the Commonwealth games-2010 is well known, but what this movie does the best is the way it has put forward their arduous journey right from the childhood till they become mature adults and the kind of discipline their authoritarian father demands from them.

The first half serves you with a subtly concatenated Bollywood style scenes peppered with humour and some real good music. Music-director Pritam and lyricist Amitabh Bhattacharaya manages to knit the songs and lyrics with the layers of the scenes in the perfect combination possible. You actually feel the goosebumps moments when the title track is being played on the screen.

What holds back the movie from bringing all the stars to home is the message it tries to convey. Unlike Aamir’s previous experiments which were quite clear in their social upliftment role, Dangal may seem fuzzy at many instances.
Whether it is about feminism or about the prolonged Indian culture where questioning parents’ wishes is equal to committing some kind of sin or about the metamorphosed male who is trying to change the role women play in society.
These questions may go unanswered in your mind.

Also the questioning on the techniques of the coach of NSA (National Sports Academy) may be covered up with the fact of corruption involved within the sports arena in India but it cannot be justified completely on this ground alone.

At places the movie tends to move its objective from “transforming for betterment” to “old is gold” which makes you think about it again and you end up with confusion in head.

If we keep aside the message, Dangal is a blend of phenomenal acting (not to forget small but impressive role of Shakshi Tanwar as the mother), fine story-writing, witty dialogues, electrifying music (specially title-track) and excellent cinematography. You may disagree with the perspective of biopic-writer at some places but you cannot avoid it for sure.