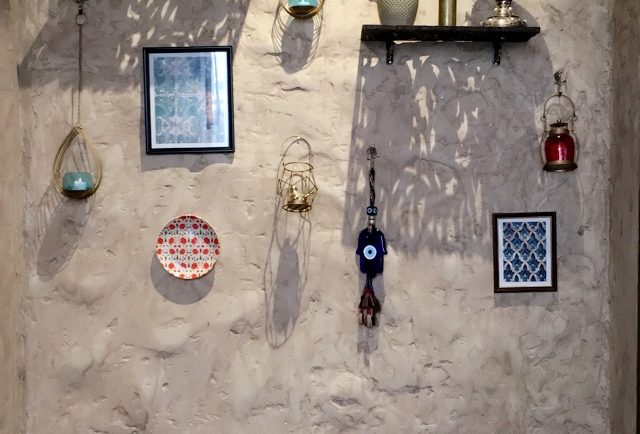 Bayroute is featured amongst the best places of Mumbai, popular for its authentic cuisine from Egypt, Turkey, Lebanon and Greece along with the opulent ambience and splendid service. Bayroute has a total of five outlets in Mumbai which in itself is a testament to its hospitality and delectable servings.

The moment you enter Bayroute, the place just transports you as if you have stepped into some fine dining place at some Middle- Eastern Country. The ambience is splendiferous and special attention is given to the details depicting Middle-Eastern designs. The place has both indoor and outdoor space having both chair and sofa seating! The lightings on the interior are magnificently aligned especially the bulbs and balloon-shaped light holders. The wall art and the curtains are the highlights and give the vintage touch to the space. The open bar is quite eye-catching with a line of spirits on the shelf. Overall, the ambience is exquisite. 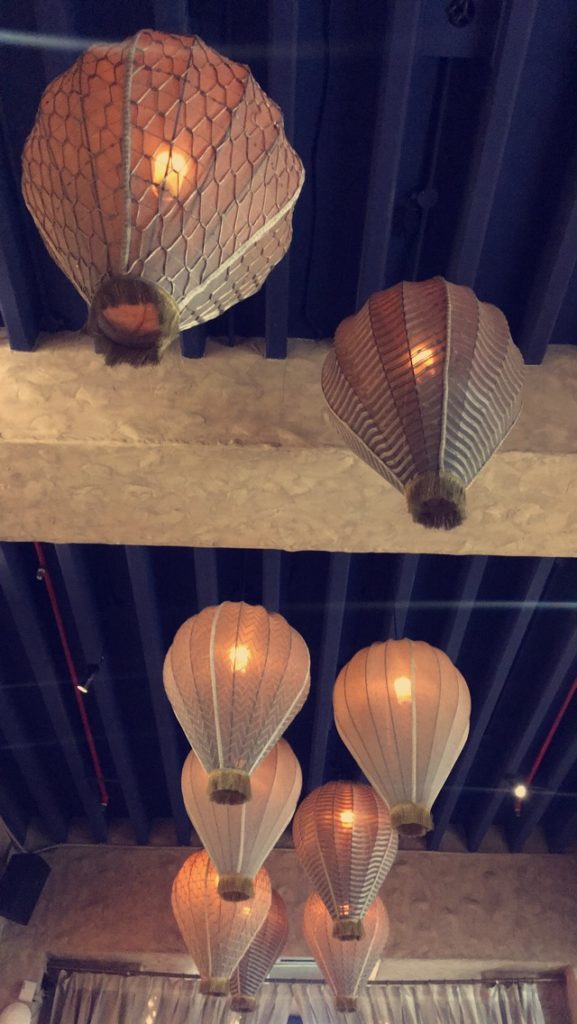 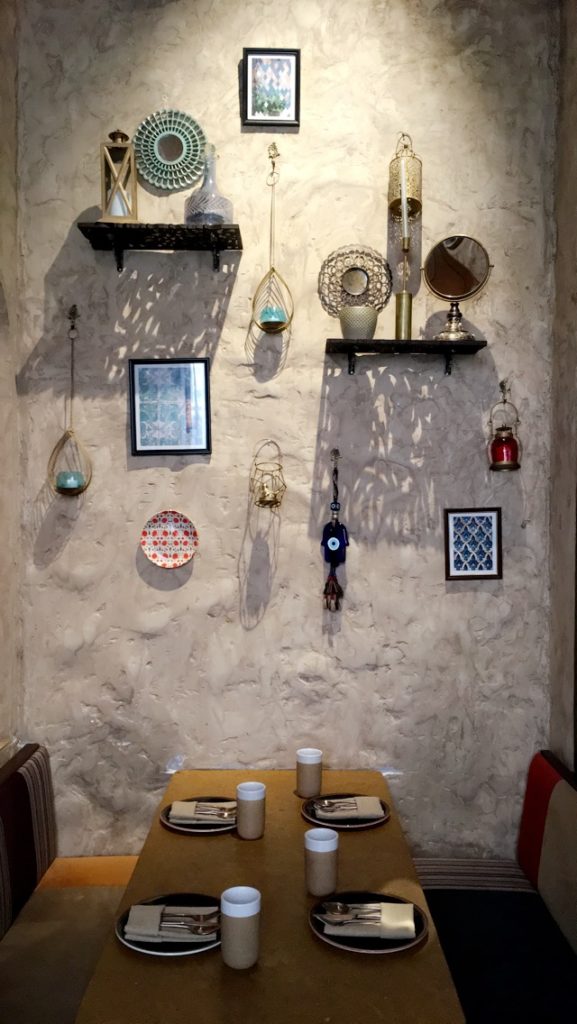 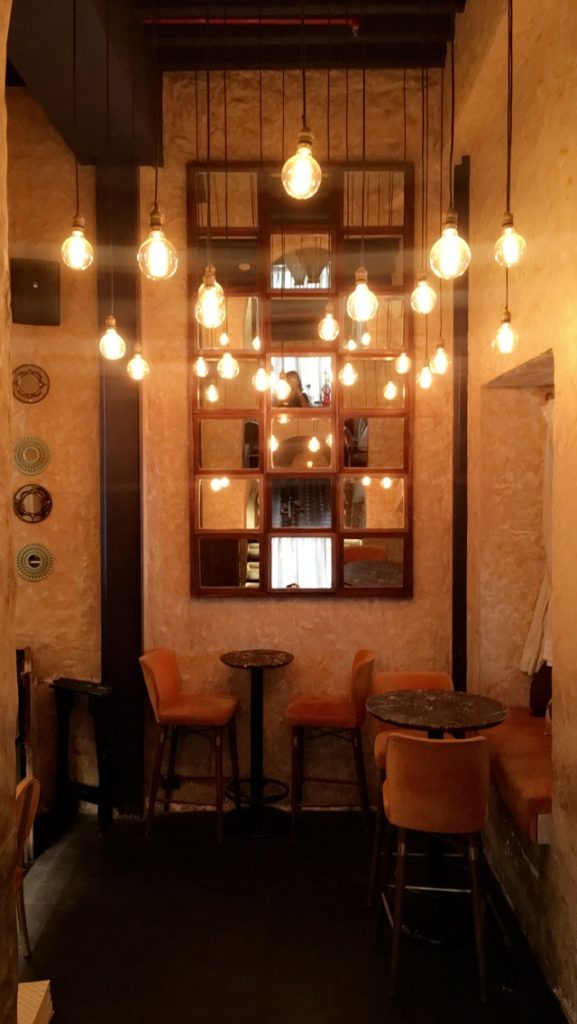 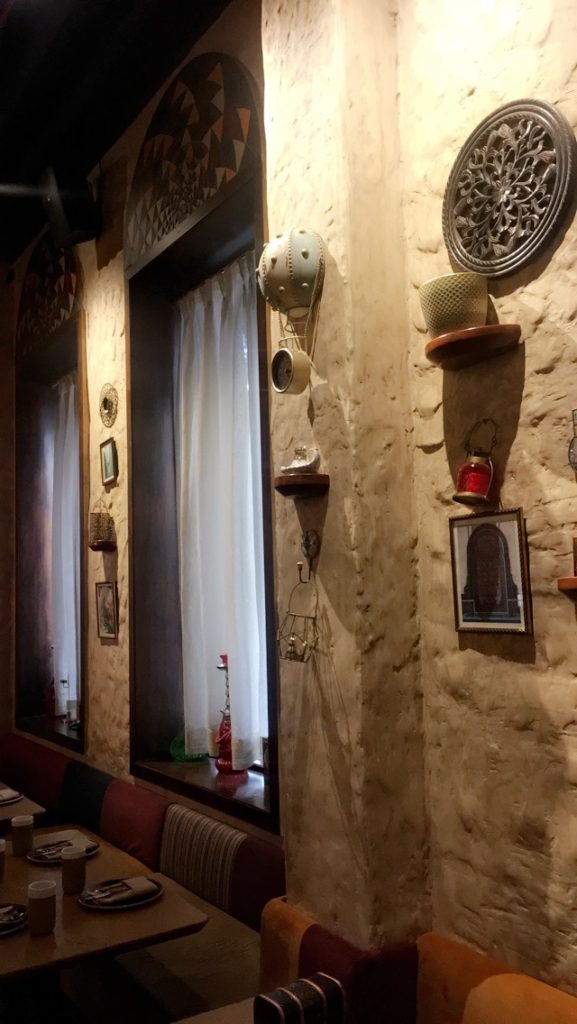 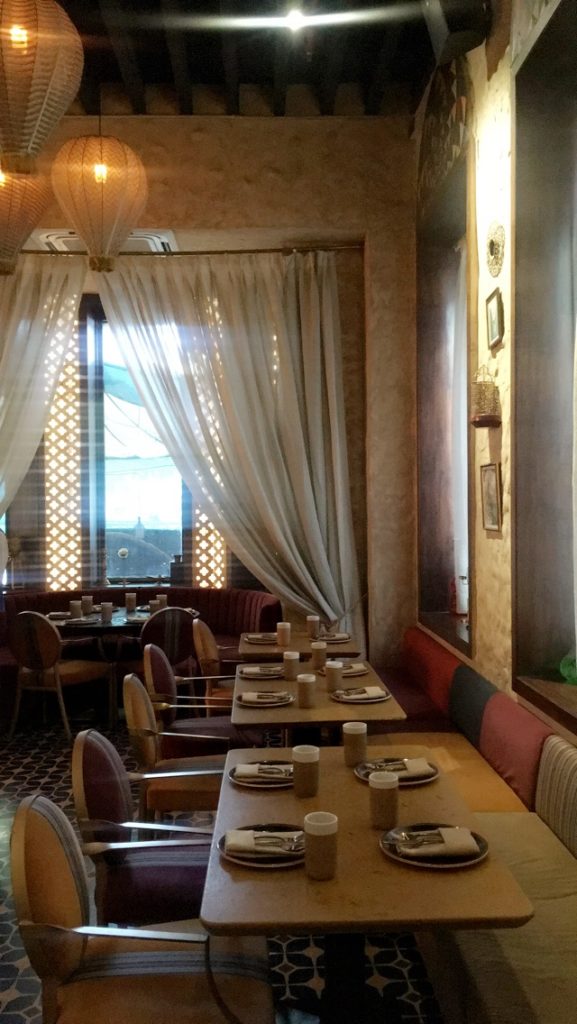 This place is a fine example of the fact that a place is defined by the staff and their hospitality towards the patrons. We found ourselves in the great company of Mr. Mashrit who was extremely well-versed with the menu and gave us genuine suggestions based on our likings. All the dishes that we ordered were on his recommendations and all were absolutely delicious! Mr Mashrit was handling multiple tables and each with a keen interest in serving the patrons with the best choices from the menu. Mr. Shamshad who handles the bar and Mr. Vithoba who is a chef, were both swift with their delectable servings hence we didn’t have to wait much for the orders. Overall, we received the best hospitality at this outlet, kudos to the staff here.

1) Drink like an Egyptian: This is an epic blend of freshly pressed cane juice, dark rum with lime juice and honey which was mixed to perfection by Mr. Shamshad who handles the bar. All the above ingredients are essentially sweet-tasting but the sweetness was well balanced, courtesy the lime juice. It’s a delectable drink which is vivifying in all aspects. Definitely a pleasant summer cocktail! 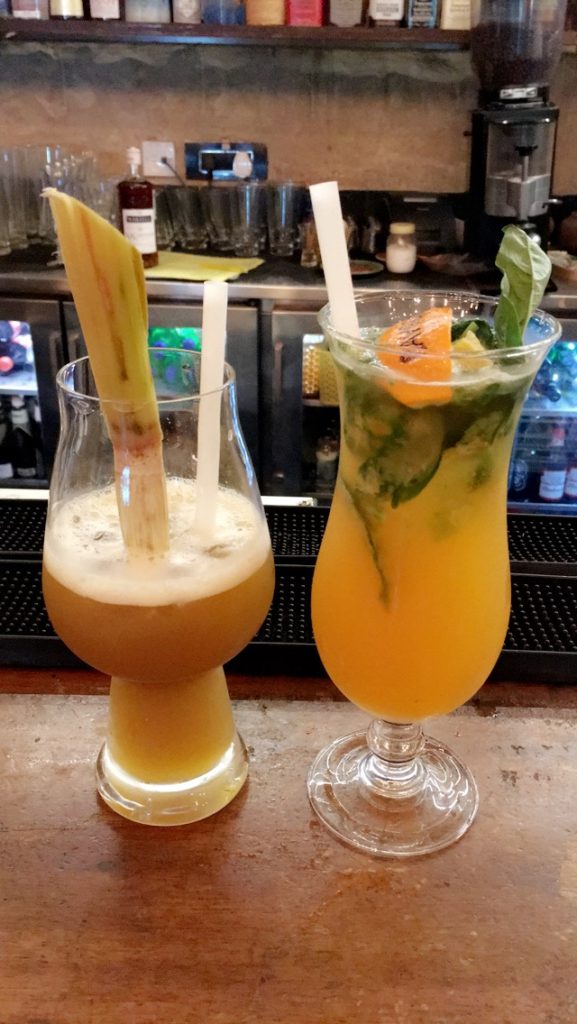 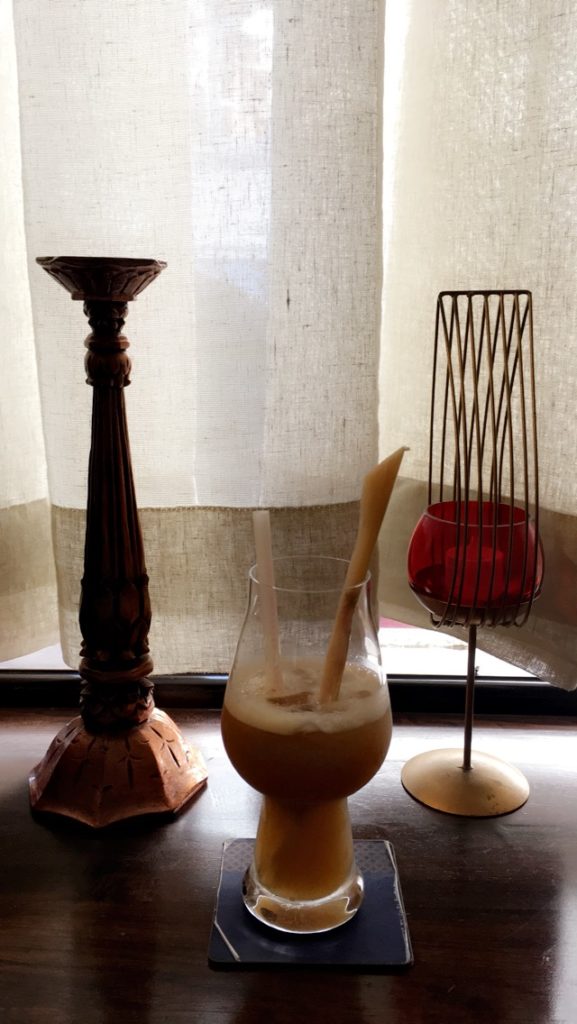 2) Blueberry and Sage Cooler: Selected from the section ‘Around the bay,’ the drink is a Vodka based cooler consisting of sage, fruity blueberries and a dash of lemon carbonation. It’s yet another refreshing cocktail having pieces of blueberries within, which makes the drink even more flavoursome. Although, the lemon carbonation could have been a bit less as it overpowered a bit in the after-taste. 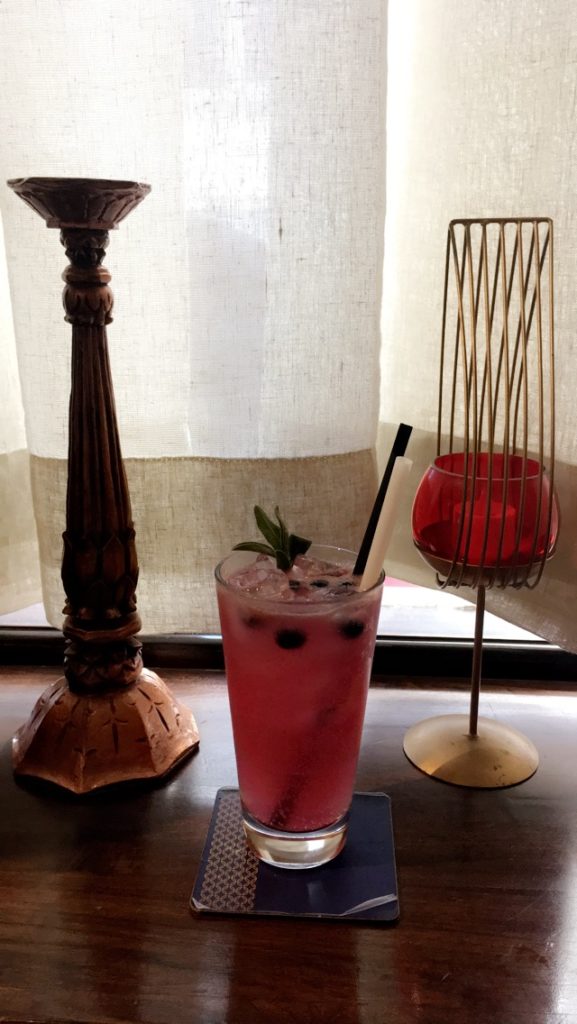 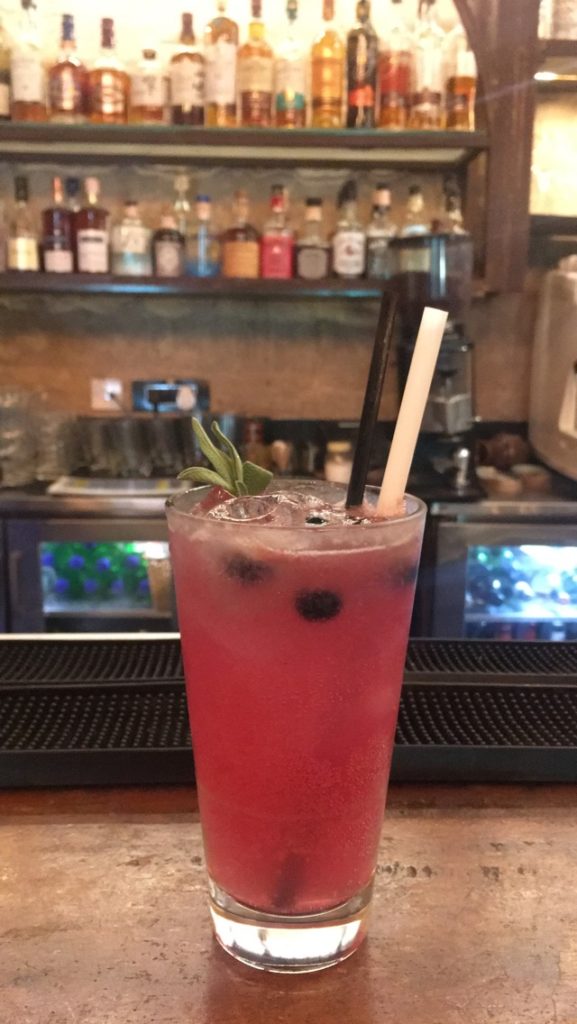 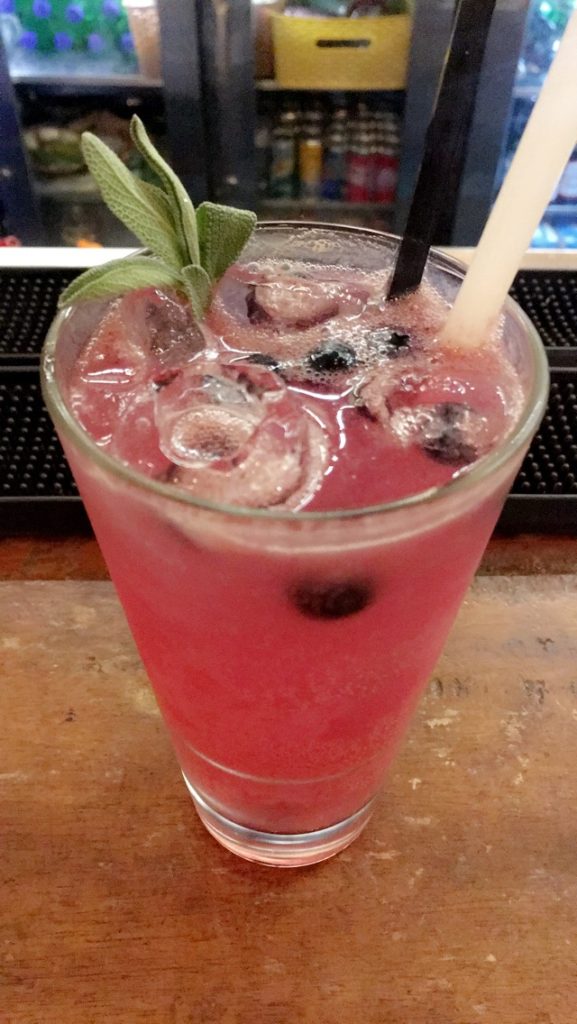 3) Sangria Middle-Eastern Style (Red): It’s essentially a Spanish drink prepared in a Middle-Eastern Style to create a fusion between the two. The fusion is one of a kind having Sangria, red apple balls (using a small melon baller) sous vide in a simple syrup – and added cardamom and a tiny bit cinnamon stick to it. The resulting flavour was an absolute delight to the taste-buds! Definitely it’s one of the best Sangrias I’ve tasted in the longest time. It’s a perfect drink for a date! Recommended! 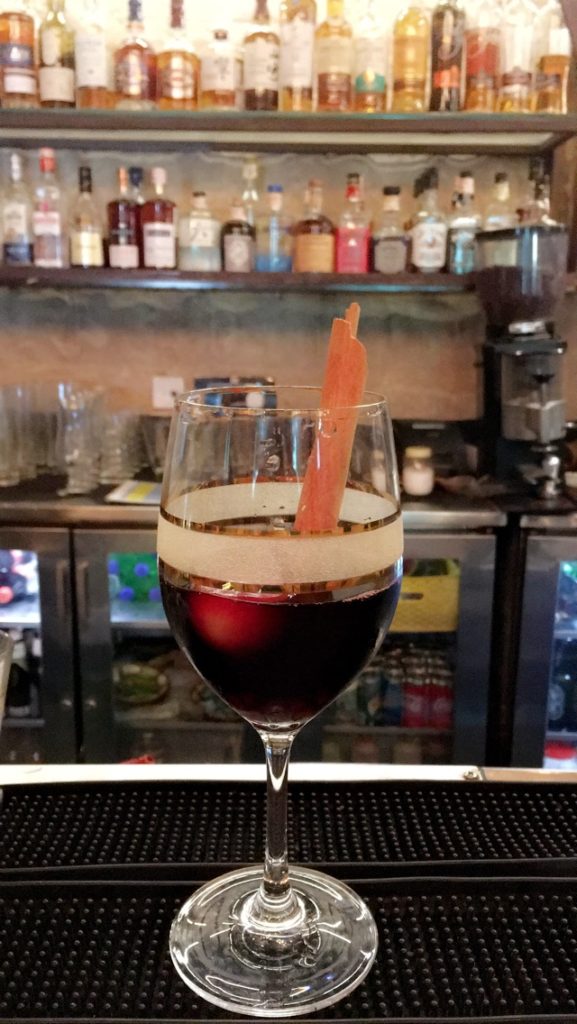 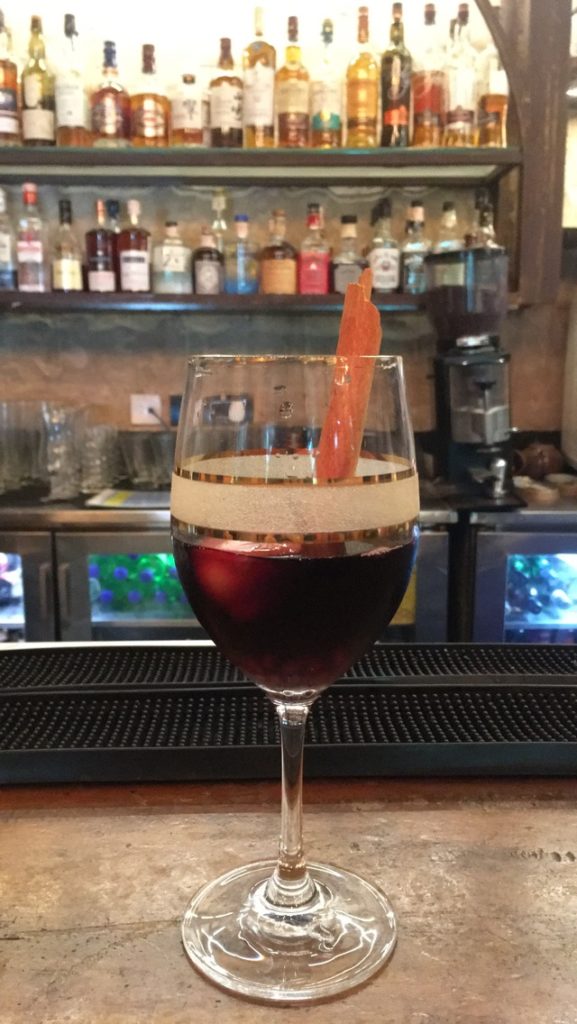 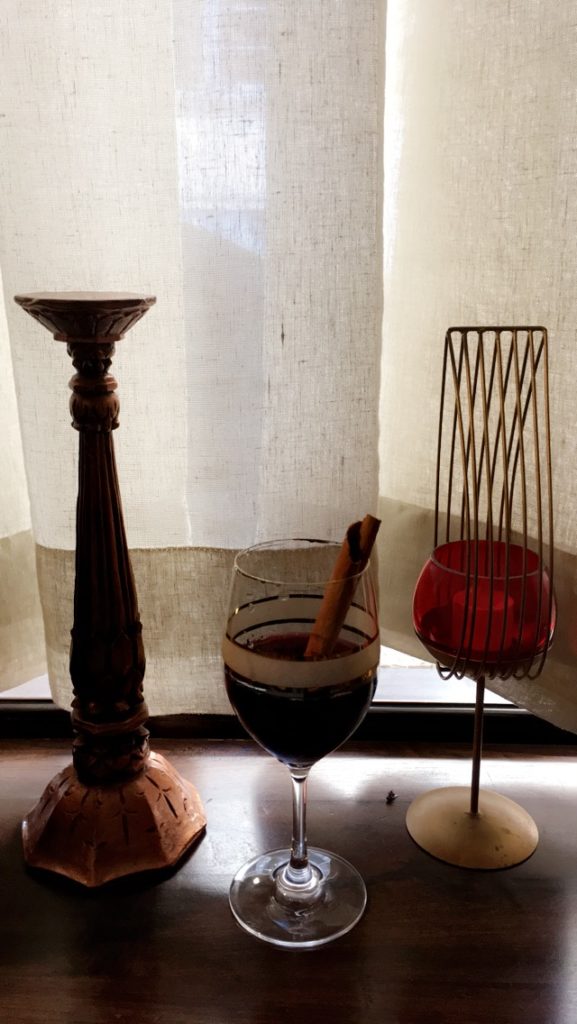 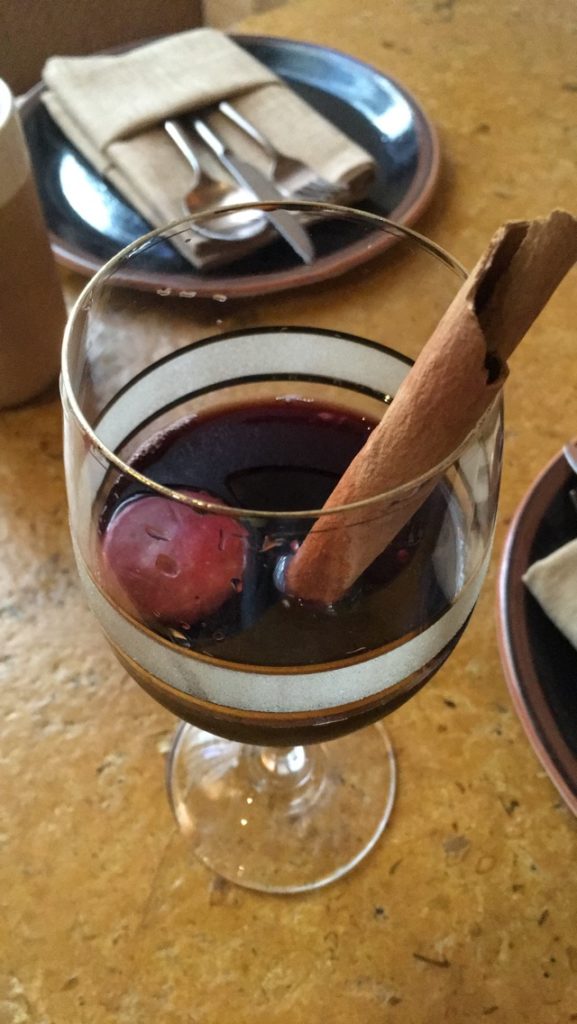 1) Reyhan:  It’s a signature Bayroute mocktail which has muddled basil soused with orange and blossom water to churn out the flavourous and delectable taste of the drink. It’s my go-to mocktail, whenever I’ve visited Bayroute, for its vivifying and delightful orange-citrus taste. Highly Recommended! 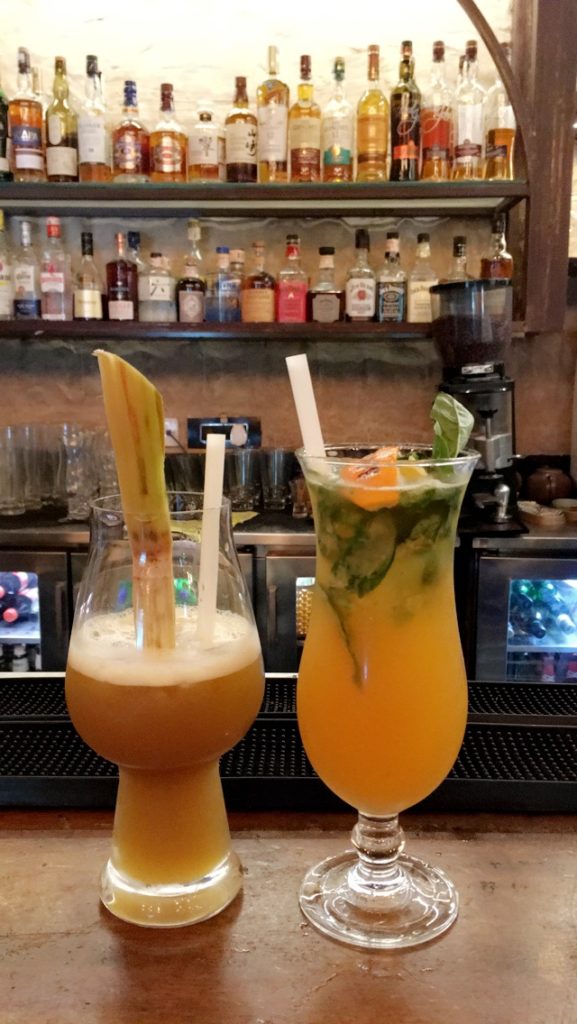 1) Hummus Bayroute with pita and farm-fresh: Another signature dish at Bayroute having the delicious and creamy hummus with greek yoghurt labneh swirl, sprinkled with some za’atar herb, parsley and roasted pine-nut. It is served along with a breadbasket of four soft pita bread and a platter containing some raw veggies as an accompaniment. Bayroute’s hummus is absolutely toothsome and easily the best I’ve tasted in Mumbai. The fresh pita bread is extremely light on the bite and its combination with the hummus is heavenly. I’d highly recommend it. 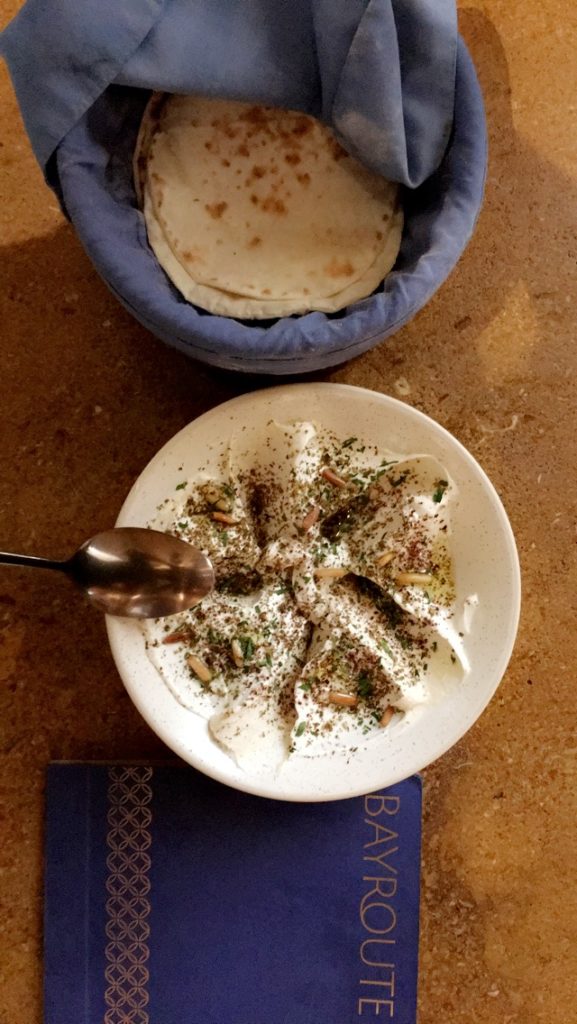 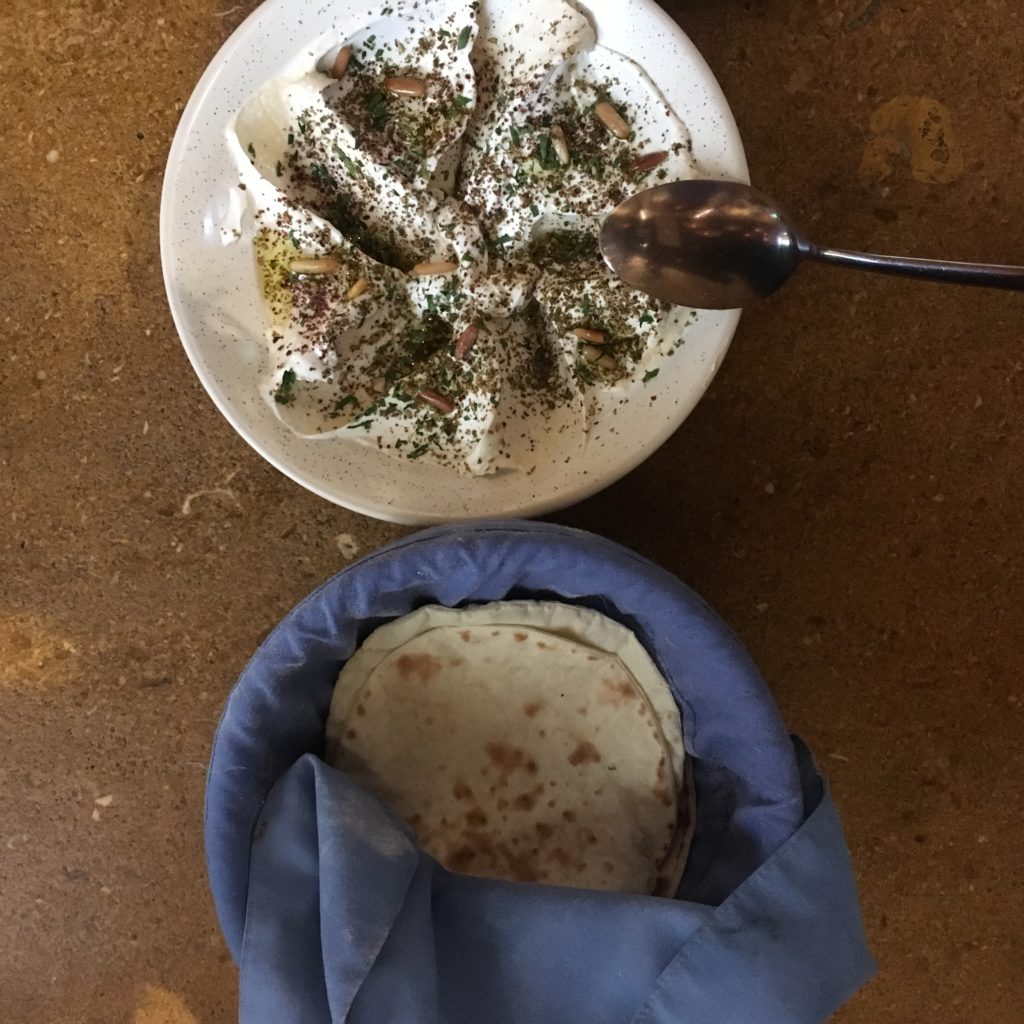 2) Harissa Chicken Kebab: It’s a traditional dish having chilli, cumin and coriander preserved chicken which is grilled to perfection! The aroma of the dish itself was appetizing and the chicken kebabs were succulent and scrummy on the palate. The kebabs were served with a dip as an accompaniment which was absolutely scrumptious! It consisted of date and jaggery molasses cream cheese which complimented the chicken and made it even more delectable. Definitely a must-try appetiser! 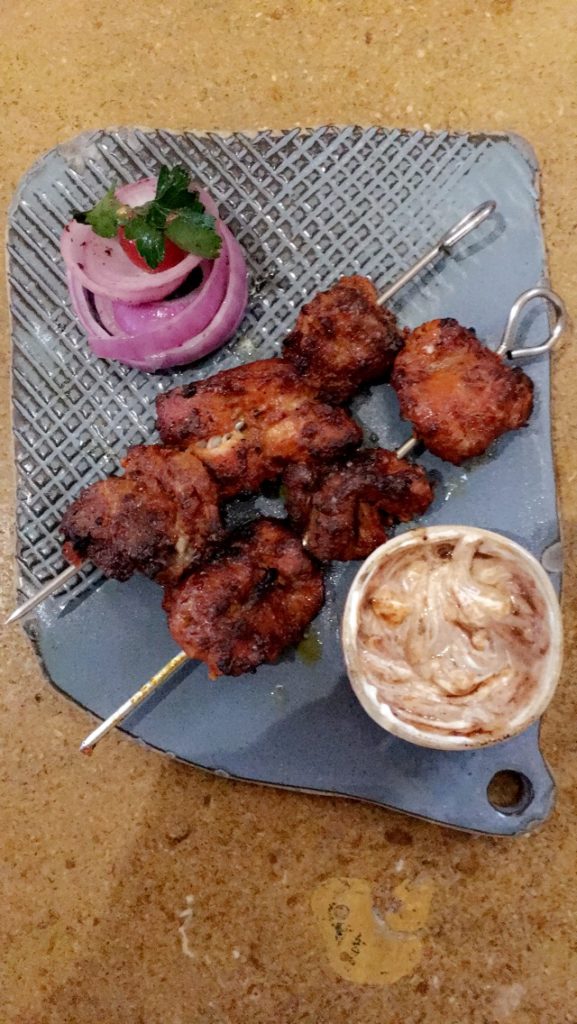 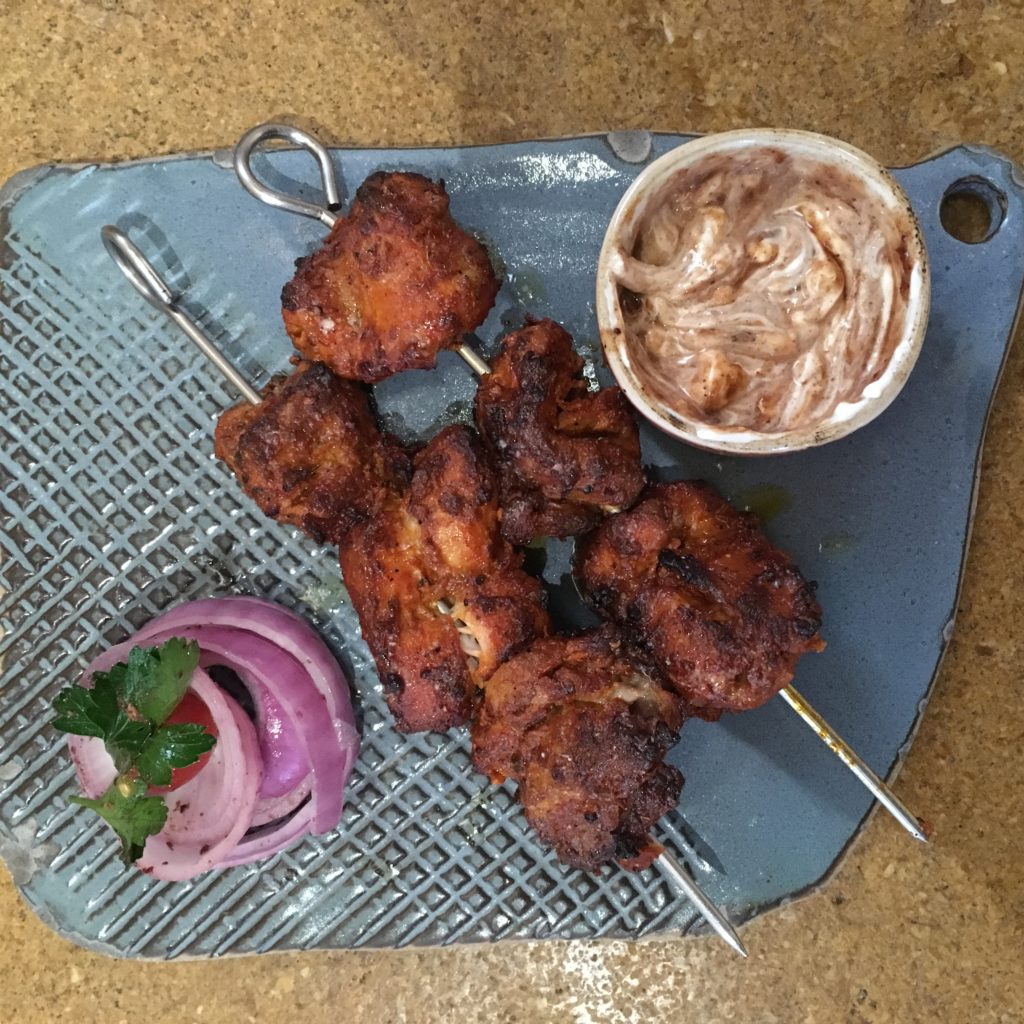 1) Ispanak Mantar: We decided to try something from the Pide section of the menu. Pide is basically a canoe-shaped traditional Turkish flat-bread which stuffed and baked to master! Ispanak Mantar is stuffed with cream of baby spinach and mushrooms, topped with kashkaval (yellow cheese made of milk), balsamic onion, pomegranate and my favourite pine-nut. The mix of mushrooms and spinach stuffing were a delight to the taste-buds and the dip made it even more flavoursome.  The flat-bread was baked to perfection and was light on the bite. Definitely a go-to main course option if you love mushrooms. 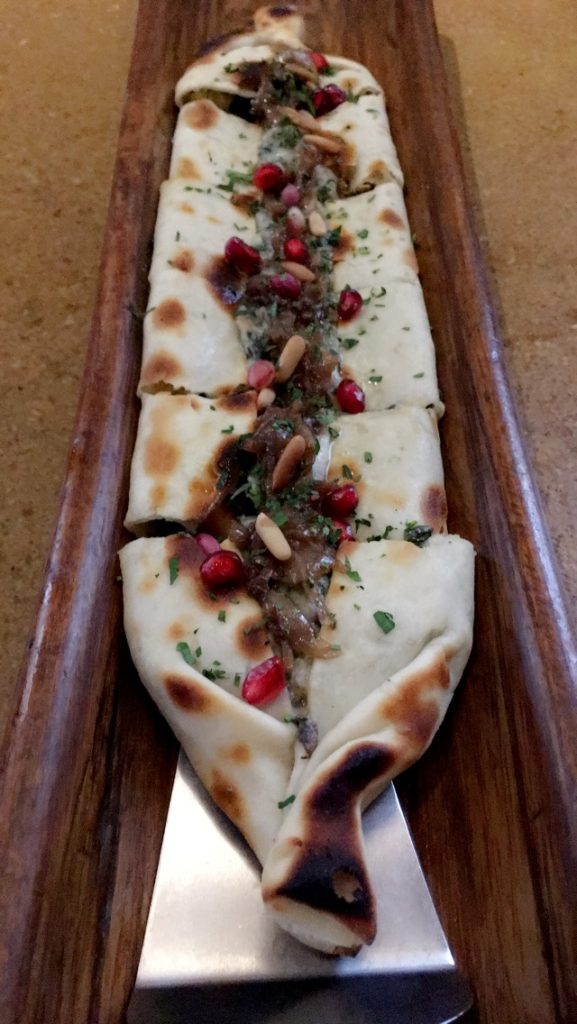 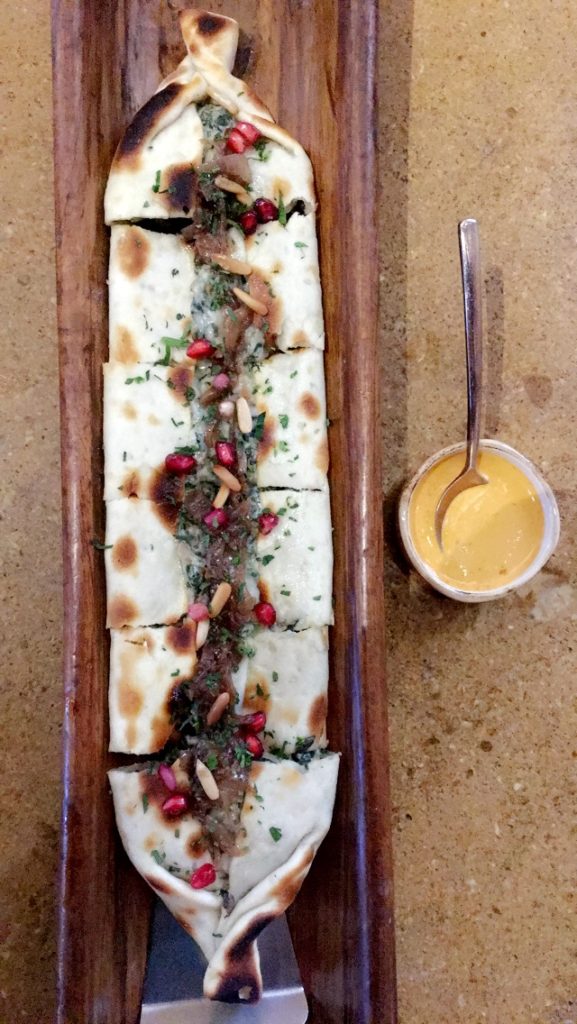 1) Baklava: The Middle-Eastern dessert dish is a rich, luscious, and a layered phyllo pastry having Iranian pistachio and almond with a layer of gulkand ice-cream in between and topped by rose brittles. Baklava is crisp, tender and not to overly sweet, making this Middle-eastern delight the highlight dish of the luncheon. Can’t recommend enough! 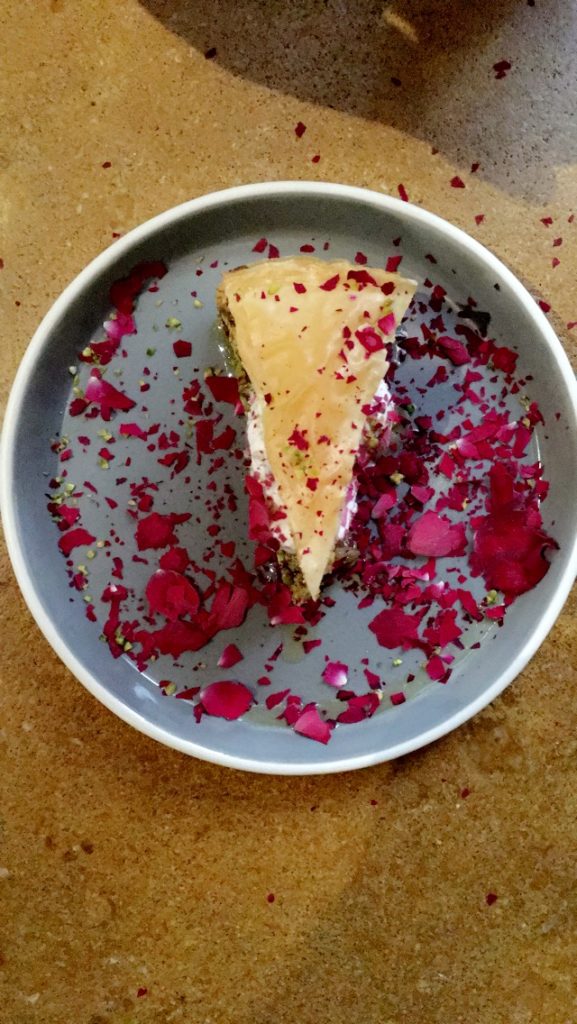 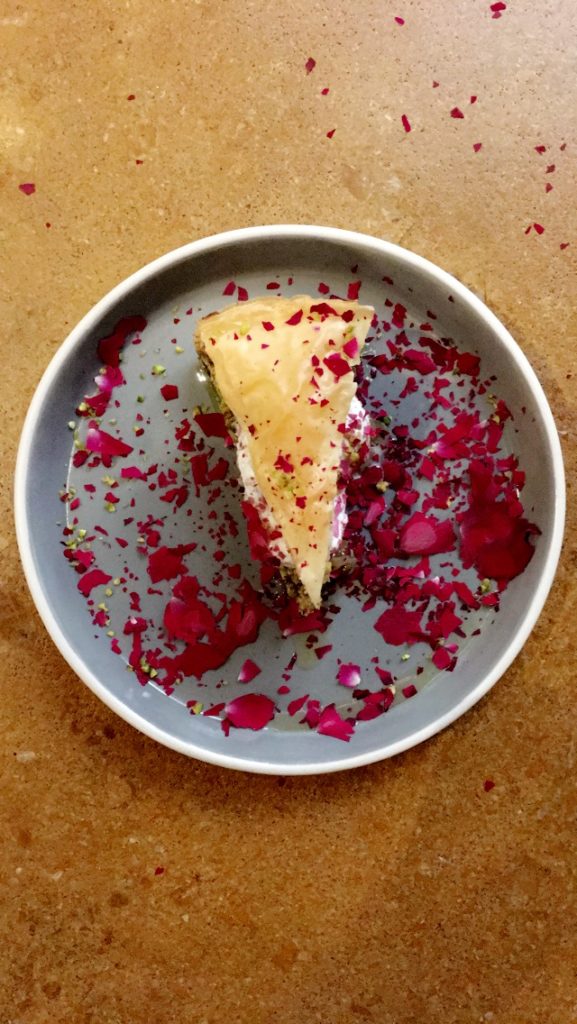 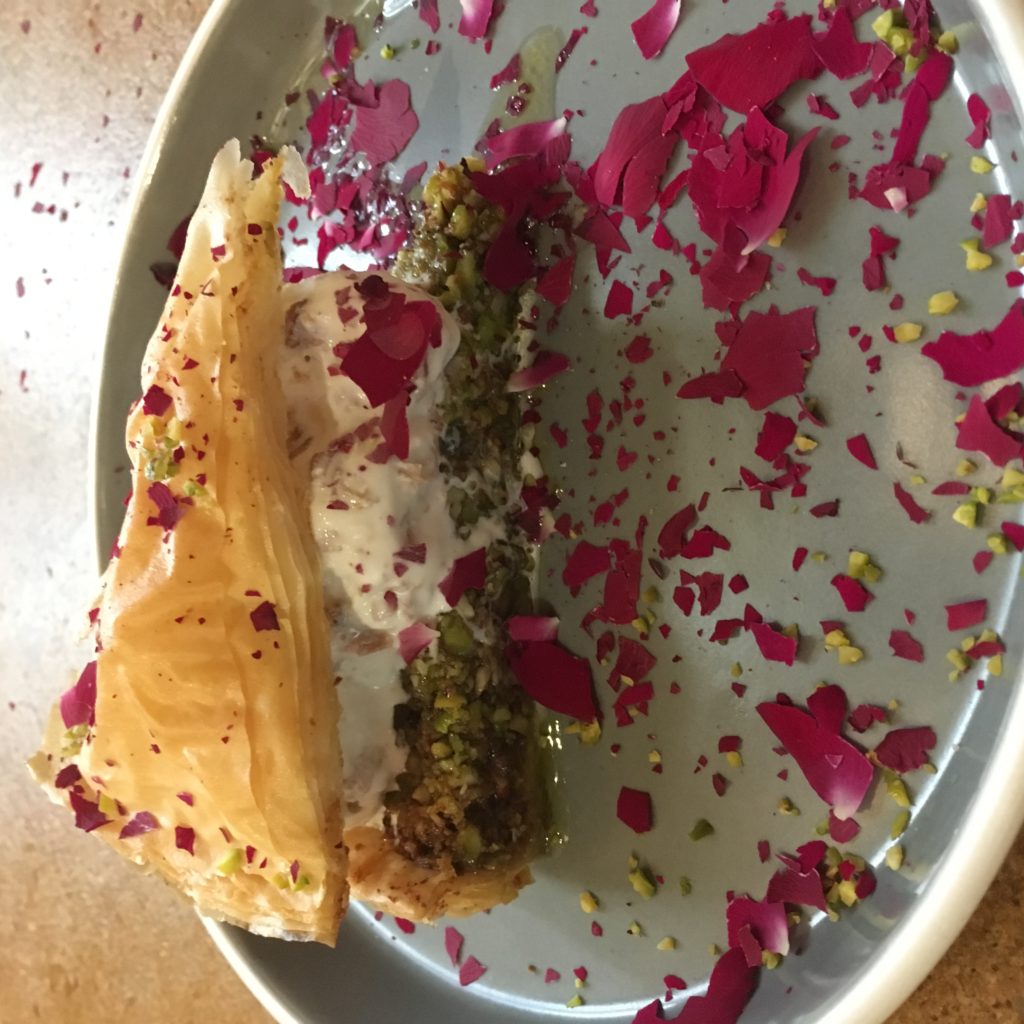 2) The Chocolate Fondant: Firstly, the presentation of the dessert was absolutely magnificent having the molten chocolate and almond honey crush ice-cream laid on a bed of chocolate sauce, surrounded by cocoa powder, which represented the mud and some flowers and mulberries planted on it. The moment when you break the fondant with a spoon and the chocolate sauce oozes out of it is the most satisfying sight to witness. The molten chocolate was absolutely luscious and rich in taste and the creamy almond honey crush ice-cream made it even more scrumptious. It’s definitely the best chocolate dessert you can have at Bayroute. Highly Recommended! 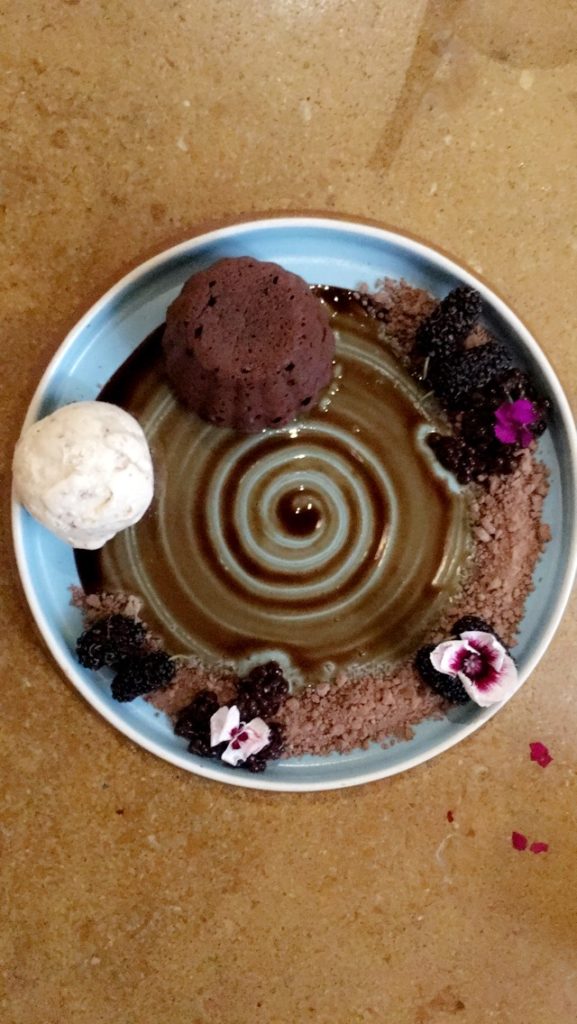 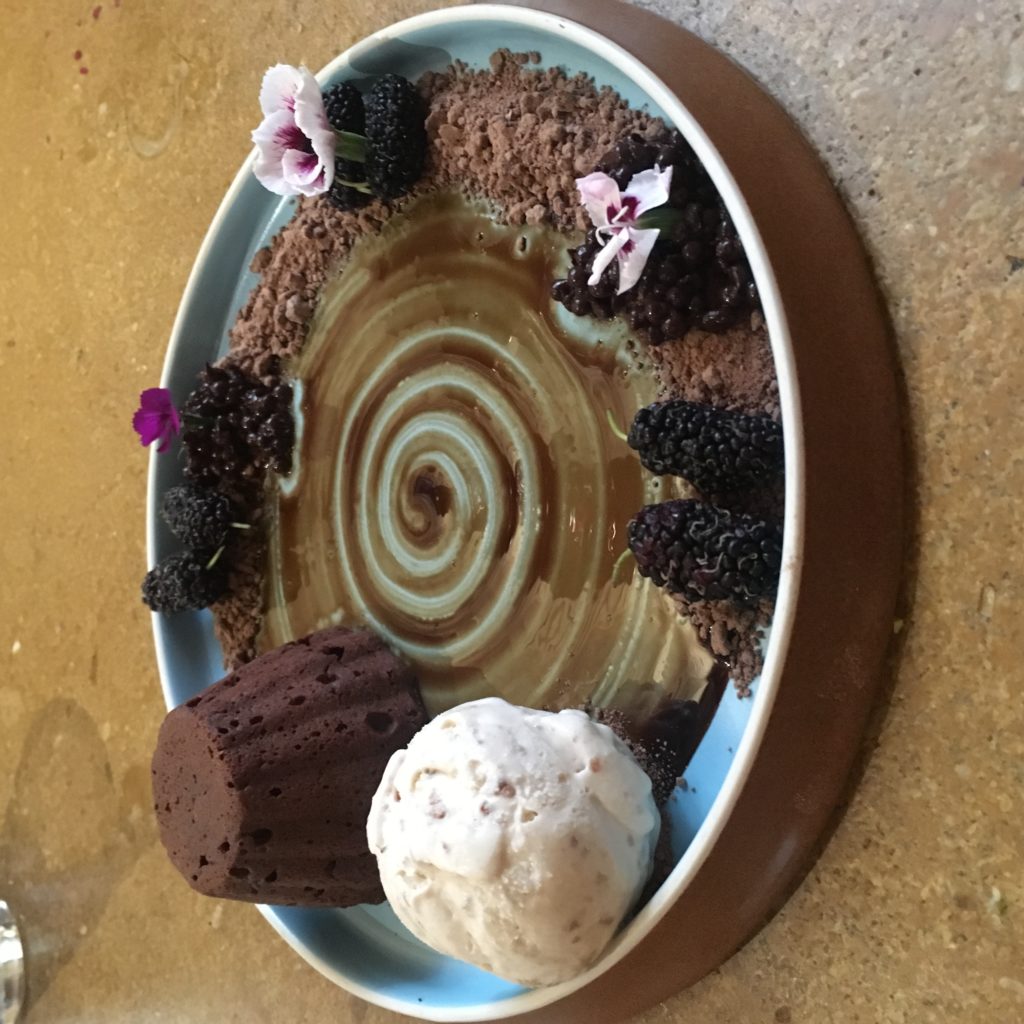 In conclusion, Bayroute, Cuffe Parade is an absolute gem of a place, just like its other outlets, that serves some delectable Middle-Eastern delights, in a resplendent ambience with some great hospitality. Definitely a place to visit this season.

View all articles by Sneh Joshi