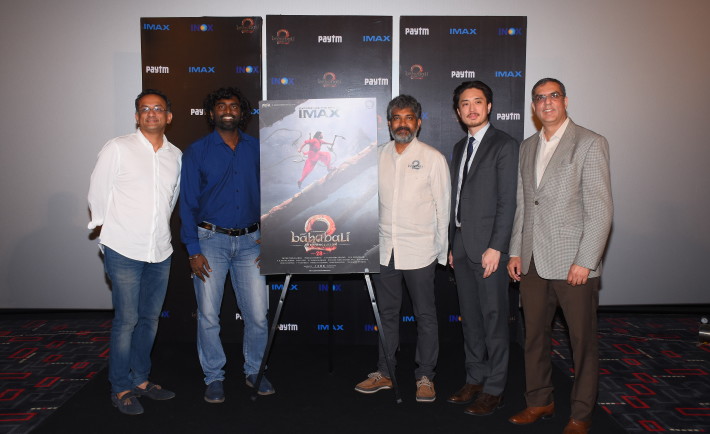 Mumbai, 12th April 2017: This IMAX launch marks the first of five IMAX® Theatres set to Open by INOX. Long-awaited Baahubali 2: The Conclusion to be released in IMAX® this April the 28th.

IMAX, being an innovator and a pioneer in entertainment technology, announced the opening of the first Paytm IMAX at INOX, R-City Mall in Ghatkopar. The new IMAX offers moviegoers a truly immersive cinematic experience, allowing them to enjoy the biggest blockbusters like never before – starting with the IMAX release of the highly anticipated Fate of the Furious on 12 April.

Today’s announcement which follows the five-theatre agreement IMAX announced with INOX last year, marks the 10th IMAX theatre in India and the fourth in Mumbai since IMAX first started operations in the country in 2001. In addition to Mumbai, IMAX also has presence in Noida, Pune, Chennai and Bengaluru.  IMAX expects to open four additional theatres by the end of this year in other key movie going markets in India.

John M. Schreiner, Senior Vice President, Theatre Development, Russia, CIS, Middle East, India and South East Asia – IMAX Corporation said We are excited to launch the new Patym IMAX theatre in Ghatkopar together with our partners INOX ahead of what is shaping up to be a very strong summer blockbuster season. India is a strategically important market for IMAX, which we believe has strong growth potential over the next several years. IMAX theatres in India have been extremely well-received by audiences and we remain committed to our promise of bringing the best movie experience to viewers.”

Siddharth Jain, Director – INOX Leisure said, “We are proud of our Multiplex at R-City, Mumbai, which promises to be a never-seen-before cinema experience in the country and we are delighted to have an IMAX screen at R-City, which delivers the world’s most immersive experience in entertainment. Having signed India’s biggest IMAX deal, we’re looking forward to many more blockbusters. Our association with ‘Baahubali 2: The Conclusion’ as a multiplex partner, further enriches our offering to our guests, with the introduction of this IMAX experience.”

S.S Rajamouli, Director of Baahubali 2: The Conclusion, said, “We are excited to be releasing Baahubali 2 in the IMAX format. The whole grandeur and special effects of the movie will come alive on screen making the experience totally surreal. IMAX’s commitment to quality and their ability to differentiate movies and present them at their best helps us film-makers to experiment with the scale and treatment of our movies.”

About The IMAX Experience®

In IMAX, you’re experiencing a different movie altogether: everything from the movie itself to the theatre’s technology and design was developed and customized to make you believe you’re part of the action.

IMAX works directly with filmmakers to enhance the movie using its Digital Re-Mastering® process, which delivers superior picture and sound quality. Played through IMAX’s state-of-the art projection system, the resulting images are so lifelike and crystal-clear you’ll forget you’re in a theatre.

IMAX grabs your senses. You don’t just hear the powerful sound system; you feel it all around you. Visually, there is no frame. IMAX’s custom theatre design creates a picture that is higher, wider and closer – filling your peripheral view.

It’s not one thing that makes The IMAX Experience, but a combination of all these elements. That’s the difference between seeing a movie and being part of one.

IMAX, an innovator in entertainment technology, combines proprietary software, architecture and equipment to create experiences that take you beyond the edge of your seat to a world you’ve never imagined. Top filmmakers and studios are utilizing IMAX theatres to connect with audiences in extraordinary ways, and, as such, IMAX’s network is among the most important and successful theatrical distribution platforms for major event films around the globe.

IMAX is headquartered in New York, Toronto and Los Angeles, with offices in London, Tokyo, Shanghai and Beijing. As of Dec. 31, 2016, there were 1,215 IMAX theatres (1,107 commercial multiplexes, 16 commercial destinations and 92 institutions) in 75 countries.  On Oct. 8, 2015, shares of IMAX China, a subsidiary of IMAX Corp., began trading on the Hong Kong Stock Exchange under the stock code “HK.1970.”

IMAX®, IMAX® 3D, IMAX DMR®, Experience It In IMAX®, An IMAX 3D Experience®, The IMAX Experience®, IMAX Is Believing® and IMAX nXos® are trademarks of IMAX Corporation. More information about the Company can be found at www.imax.com. You may also connect with IMAX on Facebook (www.facebook.com/imax), Twitter (www.twitter.com/imax) and YouTube (www.youtube.com/imaxmovies).

View all articles by Parv